In this article, we will be looking at PowerApps, commonly used to build task-based applications that work with Dynamics 365 data and other data in your enterprise. Also, see how you can use Microsoft Flow along PowerApps for automation of tasks across different applications including tasks started within the PowerApps.  In both cases, we will be looking within Dynamics 365 and leveraging some of the data and services that you are used to working with.

We’re focused on an internal line of business applications, productivity applications that make users more productive, these are guided by measure, act and automate.

Think about the measure as being all about analytics and measuring performance and how are we doing on things and using that to ultimately decide how to act.

Act is when a user is interactively using the application that’s been built.  And automate is the background, something that happens either on a timely basis or in the background started by another process. It runs without guidance automating something that might be either too complex for the user to do on their own or too tedious, therefore, we want to automate the process or connecting across multiple systems.

The key thing to understand here is that the focus is on empowering the power users and you will be able to build applications without requiring developer level skill sets or knowledge of the underlying developer technologies. However, that doesn’t mean that there isn’t a role for developers also.

There may be some things that you need to do in your PowerApps that requires developer assistance, e.g. developers can build things in Azure App Services or Azure Functions that can be called from PowerApps and be able to extend PowerApps to integrate with those more complex operations, allowing that seamless transition from power user-created application to developer created functionality.  The same thing with Microsoft Flow, the Flow runs on top of the Azure logic app’s infrastructure but provides a more power user focused interface, but at the same time that Microsoft Flow can be re-implemented using the Azure logic apps to be able to do more complex things that aren’t possible in the Flow interface.

PowerApps and Microsoft Flow have the ability to connect to data and services across the enterprise as well as external services that you need to bring in and orchestrate processes across the different applications.

PowerApps, Microsoft Flow, the Common Data Service, and the connectors and gateways that make all this possible to connect.

The PowerApps, Microsoft Flow, Azure all being the low-level infrastructure components that we then build on top of it the other applications such as Dynamics 365.  But these all work together, and through the connectors that we have available that are in use by PowerApps and Flow we can connect to things like the Office 365 services.  We can connect to the external services that are provided by third-party business applications and using the Common Data Service we can store data that are relevant to all of these. 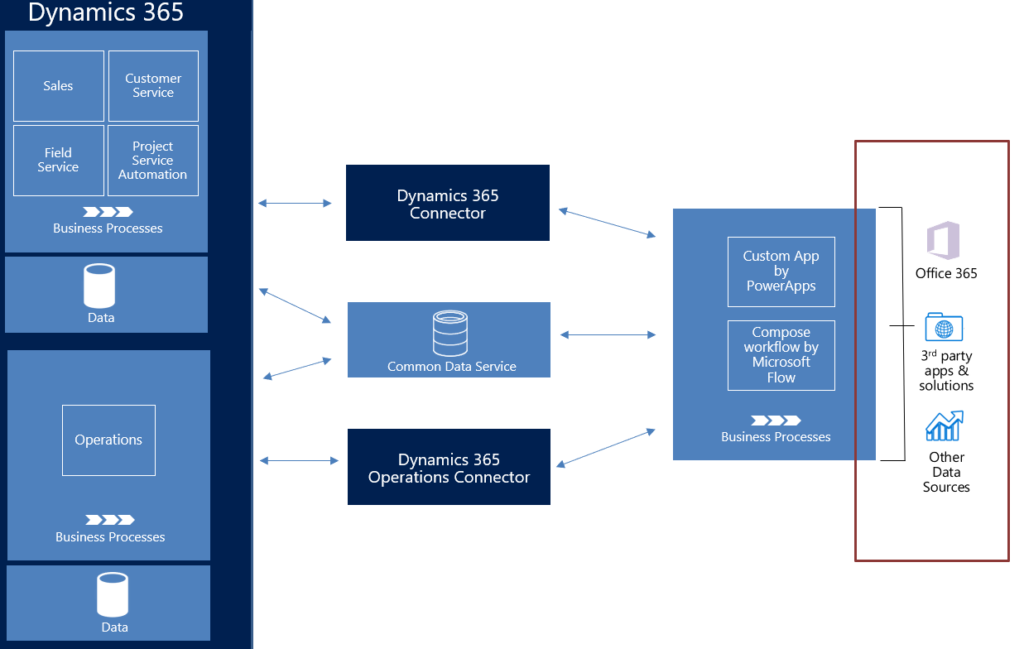 By adding the connector and identifying the instance that we want to connect to from Dynamics 365, we can then select the data entities that we want to expose the data to that PowerApps.  That data is then available for use in the galleries, lists of records or on individual forms or for interaction for things like creating records within the PowerApps and then storing it back into Dynamics 365.

Once we establish the connection, it’s available for both PowerApps and Flows to use that connection. There is a Dynamics 365 for finance and operations connector, also Dynamics 365 connector is for the customer engagement application data repository, sales, field service, customer service, and project service automation.  The Dynamics 365 for finance and operations connector is specific to the Operations Data Store, but it works in a similar way exposing ability to trigger and execute actions such as create queries against the data repository and the Operations Data Store.

I-Net Dynamics is a IT infrastructure and Microsoft Dynamics GP and 365 Specialist focusing on helping our customer improve their cyber security and business processes.